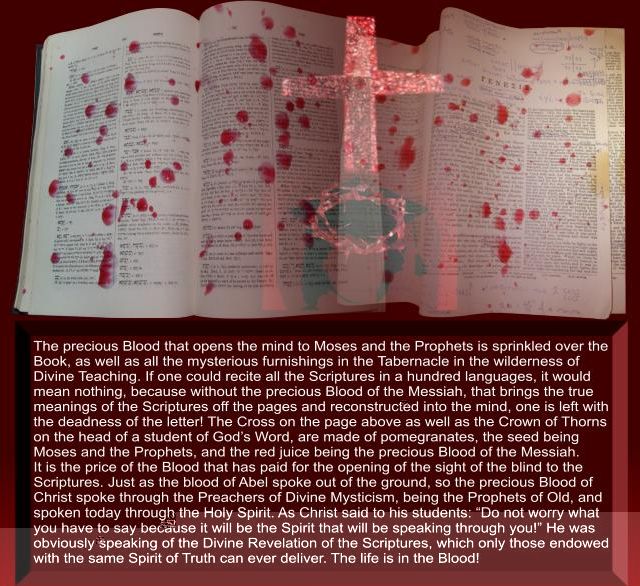 The pomegranates at the bottom of Aaron's robe alternate with bells. Open up a pomegranate and you will see the abundant seeds immersed in red juice representing the power of Christ’s Blood to open His students mind to the Word of God which is the Seed written in Moses and the Prophets, the only biography in history of a person not even born yet. Christ’s Birth, Life and Death are revealed in Moses and the Prophets fully. When one bears his own cross, and wears his own crown of thorns - he shall surely learn everything about Christ’s Earthly life - because he will be walking in exactly the same footsteps as His Lord and Teacher. When you eat his Body, and drink His Blood, do they ring any bells, like you are walking in His footsteps suffering with Him? You will know a tree by its fruits - a tree is a teacher, and if his students are Scriptureless, it is because the tree is rotten to the core, its roots are not in Moses but in this God forsaken World and its temporary wealth. If anyone thinks that he owns one single atom in this World - he is the one deceived! Faith comes only by hearing the Word of God - written by the Holy Prophets, yet despised throughout history. The Word of God is paid for, and interpreted by BLOOD alone! Faith alone pleases God, and not the dead faith of this World.

MAP of the 6 Heavenly Days of the Creation of a Student in God.

Moses and the Prophets is the biography of the Suffering Messiah - the King of the Jews. Therefore when the Risen and Hidden Christ says:
"Many will come in My name, but do not believe them."
And:
"Heaven and Earth will pass away, but my Words will never die."
Also:
"I Am the same Yesterday, Today and Forever!"
2000 years ago many people wondered why God had suddenly re-emerged after centuries of being silent. Well, the Prophets were missing, but it did not mean God was not working, and the Money Men who were making lots of lolly from the Scriptures had a nasty shock in the form of John the Baptiser and, of course, the Messiah. It is the same today - God does not stop working and He is still the Greatest Teacher now as He was 2000 years ago. When the Hidden and Risen Christ says:
"I have not come to abolish Moses and the Prophets, they are the Ones giving evidence about Me!"
The Risen and Hidden Christ was talking to those who were ensnared by the Law because they were ignorant of their true meanings. Many were blind, deaf, dumb, lame and leprous because they had stumbled in the true meanings to the Scriptures. The One True Author of the Scriptures came to rescue them by expounding what the Scriptures really meant so that they could go on towards the goal of Walking with God in Truth and in Spirit.
The masses today think that the Scriptures were the New Testament, when any reasonably intelligent person knows that they were written years after Christs Resurrection. The Keys given to Peter containing the meanings of the Scriptures - therefore to all of life itself - is given to God's Students who study them relentlessly all their lives.
.

Whatever experiences you have had in this life, do not believe you are a Christian by making a simple confession as the many are told. At first, life is like being in the womb where God prepares you without you having any knowledge at all of what He was, and still is doing. In other words, it doesn't matter how terrible your life and circumstances have been, it can only be seen as a good preparation to the WAY. To begin your life on the Way, God uses your past experiences so that you can then walk with Him according to the Scriptures. A simple confession does not mean that it is the end of suffering, but the beginning, and because you have suffered before - the easier it is for you - one can then go on and learn the great mysteries that God has in store for you.
Look at the MAP above! When you begin as a Christian your mind is automatically in hell, which is a state of being both real and temporary. This hell is full of shadows of the real things that are eternal. Just as there are unteachable bullies in a physical classroom intent on the destruction of those who want to learn, so there are many in God's classroom, but far more evil. God has His WAY of teaching His people that is different than the way of men - far different! There has to be a way in which the mind can have the freedom to move between the different levels, and only God can show you the WAY, and He does it with ease through suffering. Moving with God is to embrace His Holy Scriptures and to study to your hearts content, and it is only God - not man - who can give you the heart and mind to follow Him in Truth. Not the blind faith of this world, but a good faith full of knowledge that God gives by cloning His Spirit with yours.